We Will Remember Them

This workout can be done as an individual or as a partner workout.  This should take you approximately 60 minutes to complete.

The workout is to be completed in a 10kg weight vest.

The significance behind each movement is as follows.

The 4 rounds represents the month of April

You can substitute the row with a run and use a weight that is appropriate for your current level of fitness. 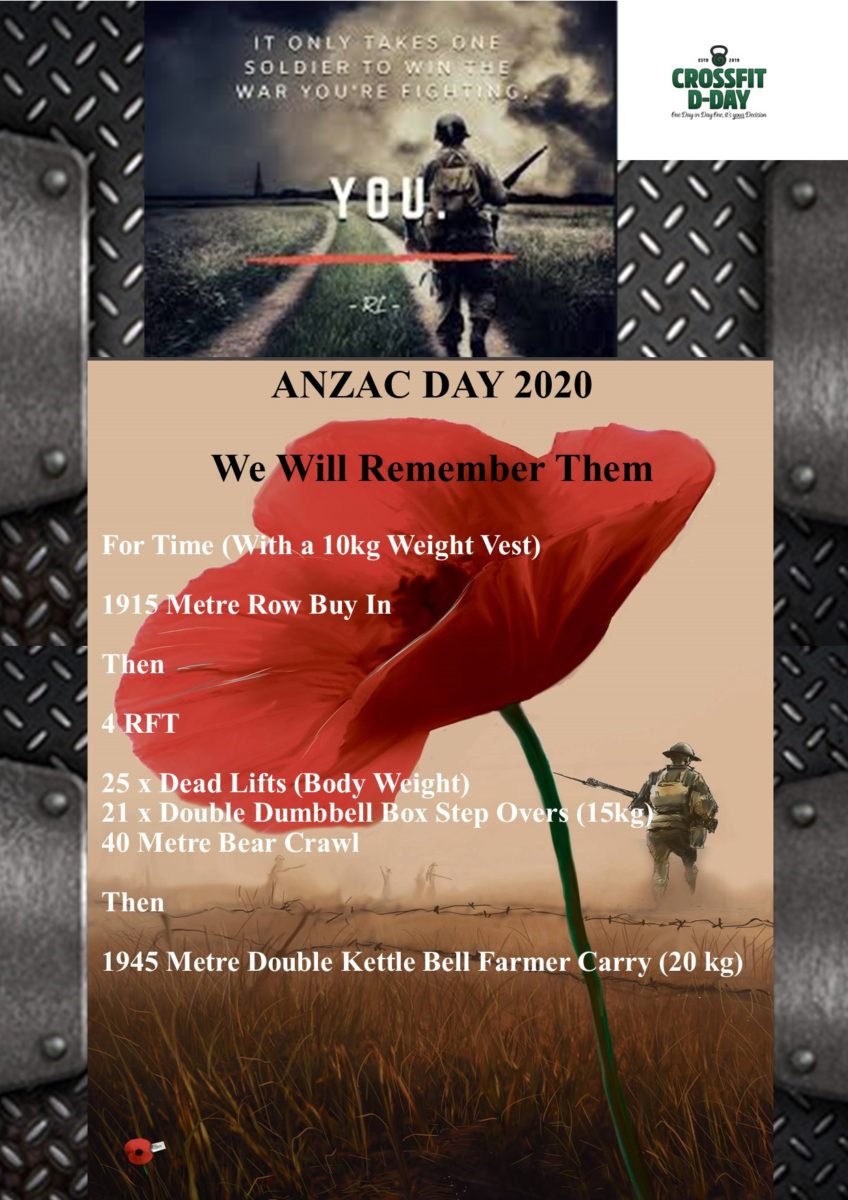 We Will Remember Them

June 6th 1944 was a day where thousands of young servicemen made a decision that not only changed history but changed their lives forever.

Here at CrossFit D-Day we honor those who gave their lives so that we all may live in freedom.

The workout is conducted in pairs or as a team.  The rep scheme and elements reflect what happened on the day where it will take you through all the emotions that they would have experienced on D-Day (Courage, mateship physical/mental strength, determination, comradeship, endurance and suffering.  To describe the elements will give you a better understanding of the workout.  Once the buy in has been completed, you can storm any of the beaches in any order and fight your way through each of them.  The workout can be conducted in a 10 kg weight vest to replicate the personal equipment carried by every soldier on the day.

TIME CAP 60 MINUTES.  All Military operations are run to time frames for each phase of an operation.  60 minutes is a tough ask to complete the work required but the soldiers of the day had the confidence to get the job done.

1944 metre ROW BUY IN.  This reflects the year of the invasion and the amphibious landing.

ROPE CLIMBS.  This reflects the 2nd Ranger Battalion climbing the cliffs of Pointe Du Hoc the highest cliff between Omaha and Utah Beach.

OMAHA.  The rep scheme, rounds and length of this mini workout reflect that this was the longest and toughest battle of the landings where the American 29th and 1st Infantry Divisions of V Corp suffered the most casualties on the day.

JUNO.  The 3rd Canadian Division were assigned this beach where the fierce fighting only saw a 3 – 5 km advance on the first day.

WORKOUT DESCRIPTION.  For time, after the buy in, complete the 6 mini workouts as quickly in any order you want.  You must complete the work requirement for each beach landing before assaulting the next beach or Airborne landing.  60 minutes is a tough ask.  So the question is…. can you succeed like the Allies did on D-Day. 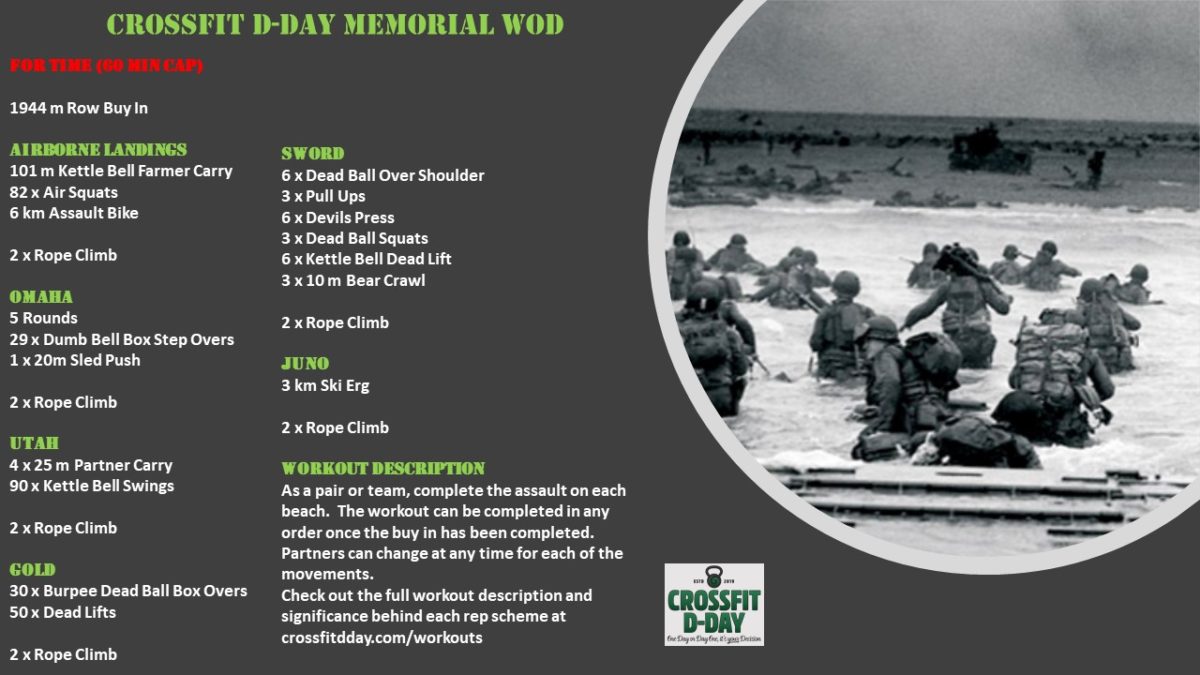 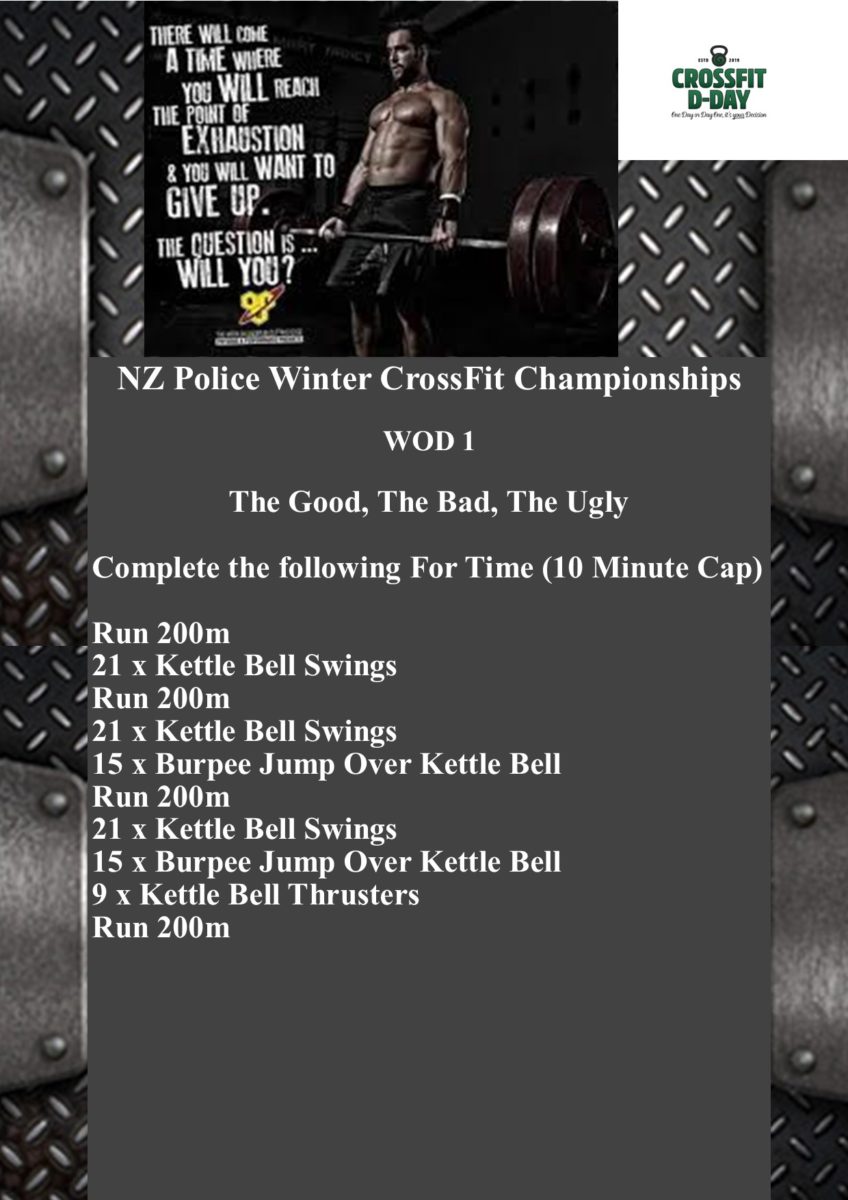 The Good, The Bad & The Ugly

This workout was used in the 2017 NZ Police Winter Games.

The workout is for time with a 10 Minute Cap.

The Need For Speed

This workout was used in the NZ Police Winter Games.

Your score is the number of repetitions completed in all 7 rounds.

The deadlift weight used were 80/70 kg for RX and 60/50 kg for scaled, however if these weights are too heavy for you at present, then scale the weight to where you can complete 10 reps unbroken. 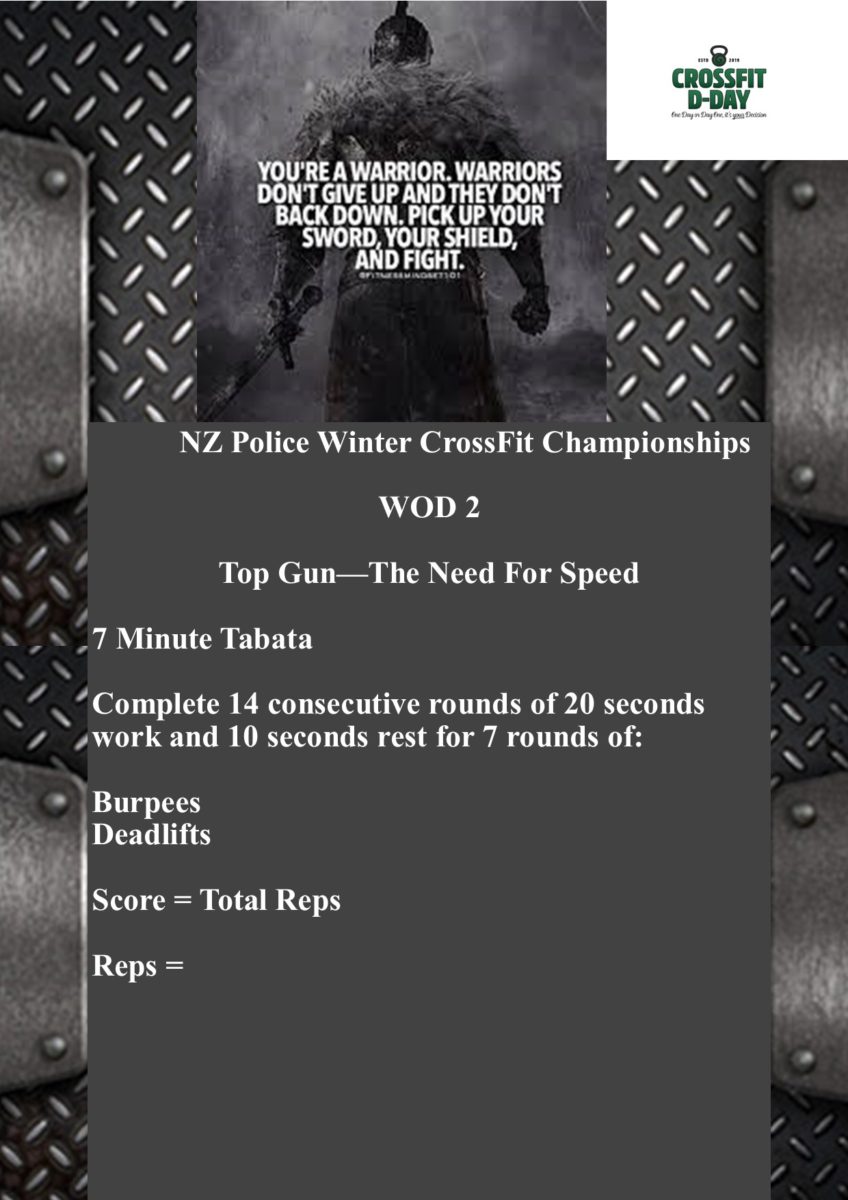 Ready to get started? Visit us today